These are the things I wish for you this holiday season:

May your solicitations be effective, not addressed to "dear friend",  not full of address labels and meaningless threats (see below, the worst of the year end appeals I have received to date)... 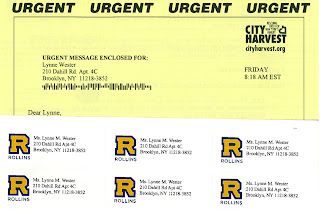 May your honor rolls and static plaques go the way of the Mayan apocalypse because no one has ever proven the ROI of either...

May your online giving forms be effective and easy, pleasurable, and mobile optimized...

May you fully integrate your social media, it has the ability to change lives and engage many...

May your events be meaningful and worth the time and effort, leaving your attendees with wonderful memories and not weighty tchotckes...

May you take care of your planned giving donors as if they were your own grandparents, or someone you're fond of...

May all of your students write thank you notes, on time on the first request...

May you always answer your phone with a smile and an open mind...

May your acknowledgments be swift, short, and productive like elves...

May you never forget that behind each an every gift, regardless of the amount, lies a human soul, a giving soul, someone who vies to make a difference...

May you know that I am so grateful for all of you, now numbering more than 5000 per week who share, laugh, learn, and read with me as we endeavor to improve the philanthropic experience for each and every one of our friends and donors.
And if all else fails, enjoy some freshly baked cookies from yours truly! 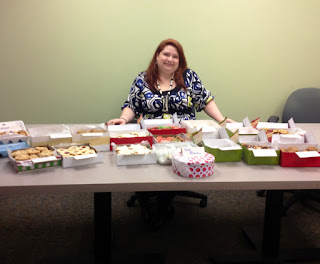 As you know, I recently performed a challenge on #GivingTuesday here.http://donorguru.blogspot.com/2012/11/the-2012-giving-tuesday-challenge.html Te results were a bit frightening and somewhat pleasing. But let me tell you, I had no clue just how bad it was about to become. Fundraising is all about the relationship,and boy do some of us have some work to do.

Here is the updated spreadsheet: as you can see, the results are diappointing. 9 out of the 14 have still sent nothing to me in the mail about my gift. 6 of 14 have already asked me to give again, that's 43%! And I have to say the follow up has been poor. From one organization I received an email saying there was a "problem"with my gift because they couldn't find me in their database, and then received a follow up call a day later because they couldn't understand why I would come out of nowhere and give. Needless to say that wasn't impressive.

The receipts were more delayed than I expected, giving me a realization that the best practice of 48 hours from receipt of a gift is not being followed.  Here are some of the receipts I received and letters to my honorees. Notice the ask before the THANK YOU in the Habitat one... argh. The letters from the Colon Cancer Alliance for my honoree and myself are almost exactly the same, no originality. And finally, the Pancreatic Cancer made my honoree look at a second piece of paper that was utterly useless and comical.  I will keep updating the spreadsheet and see how we go.  I received a nice thank you card from two places and an email from a director of development, too bad he spelled my name wrong. All in all, I would say that donor relations has work to do at these orgs, bt change can be made.

Speaking of positivity, here is the compilation of wonderful Holiday greetings that were sent to me from across the country.  I hope you enjoy the warmth and creativity as much as I did.  I would love to hear your feedback and comments as usual.
Cheers,
Lynne
Posted by Donor Relations Guru at 8:20 AM 1 comment: Links to this post

Generational Myths and other Fundraising Untruths

On this episode of fundraising Mythbusters, we're going to tackle some commonly held falsehoods. Buckle up for the ride folks and be ready for some of your commonly held beliefs to be challenged.

Myth 1: Older donors aren't tech savvy: this is probably the myth I am most presented with on a daily basis as a challenge to my new ideas regarding technology. It's simply not true. The baby boomer generation has now turned into a new catch phrase called the "Silver Surfers" they are retired and have dispensable time and income, they want badly to keep up with the younger folks and technology is the great equalizer. My parents, both part of this generation have separate laptops, a smart phone, and  pay all of their bills online. They aren't the exception, they're the norm. The #1 growing group on social media is women 55plus, and the majority of new users for Skype is older gentlemen (65plus). Online shopping has boomed and there is no excuse why digital media and your use of it shouldn't accommodate these folks. That doesn't mean that hand written notes should fall by the wayside, they are still tops, but don't eliminate digital ideas or let someone deter you because the "older" folks don't "do" technology.

Myth 2: Generation X aren't good givers and aren't engaged. You know, the classes of the 80s and 90s that you struggle with? Those in their late 30s or 40s? They're out there and they're engaged, they're just BUSY and you aren't connecting with them yet in a meaningful manner. My brother is one of those people, and I have to say that of his three alma maters only one does it somewhat well. The others have not connected... Yet. This generation is building their careers and families and their time is short and valuable. Have folks on Wall Street? Don't call them once the bell has rung, you're costing them money. Send them a linked in email or find another way to reach out, they will appreciate your awareness. Events don't work for these folks unless there's something in it for them, adapt your style to fit them.

Myth 3: Recent college graduates, or the millennial generation don't care and don't respond. Not true. This generation understands philanthropy well, they jut don't understand old school development operations well. You're not going to appeal to them with a phonathon, this is the generation of Toms shoes and the RED campaign, where products include philanthropy and their time is part of their philanthropy. How do we convert them from giving their time to their money? We explain it to them, show the impact of the dollar, have peers tell the story and allow them to have hands on experiences that make a difference. This generation has been wired since they were born, but unplugging them and having face to face time is vital to your success with this group. Show them the impact of a hand written note, and take the time to teach them how to write them, they probably were never taught. Trying to reach them? Send them a text, reach out through social media, remember, with these folks email is waning. Send them a mobile call to action or involve them in a blitz fundraising campaign. And do me a favor, stop calling them young alumni, not all of them were not 21 when they graduated. Call them recent graduates or some other name, stop reminding them they're young, you don't remind your older donors they're old all the time do you?

Myth 4: If a new effort fails, throw it out and pretend it never happened. Learn from it, celebrate your failure and instead of completely ridding yourself of the memory try to find tweaks to help manage your challenges. Every problem has a solution, one that takes an excellent idea and impeccable implementation, which one of these was your downfall? These are the things that keep me up at night, filled with delight of solving, I love a challenge. What caused the unexpected success? What led to the downfall? What could we have done better? Can I build a better implementation plan to make it smoother, better, easier, faster? Is there technology that can match my weaknesses? These are the things we have to think about, instead of just dismissing it as a waste of time.

Myth 5: Technology is expensive and prohibitive. As technology evolves, the cost begins to plummet. Remember the $600 VCRs? The first bag phones? Exactly. Most technology is free or cheap to implement and is a relatively short time commitment to learn. Technophobe? No worries, find someone who is a whiz and have them help you. When I first started speaking, I hated PowerPoint so I had my work study students help me build my presentations, now I can crank out a great slide deck in under 15 minutes. I spend a great deal of time in Excel but for the life of me can't make it print pretty for meetings all on one page with headings and a readable font. No worries, I have a friend on staff that makes me look great. It takes her less than ten minutes to do what it would take me two hours and lots of paper to do. The trick is finding a solution around your barriers with technology. Don't have the budget to do thank you videos? Do what I'm doing and have a student video contest and wham! Multiple great videos and student education about philanthropy.

What are some fundraising myths you would like debunked? Is there a challenge you face that you need help with? I'm here to help. I look forward to your responses and input. Next month out webinar will focus on donor relations for two special populations, planned giving donors and corporate and foundation donors, I hope you'll join me. For more information, click here
Cheers,
Lynne

Posted by Donor Relations Guru at 7:44 AM 2 comments: Links to this post


All data and information provided on this site is for informational purposes only. http://donorguru.blogspot.com/ makes no representations as to accuracy, completeness, currentness, suitability, or validity of any information on this site and will not be liable for any errors, omissions, or delays in this information or any losses, injuries, or damages arising from its display or use. All information is provided on an as-is basis. This is a personal weblog. The opinions expressed here represent my own and not those of my employer or anyone else but myself or guest posters.